Diacritical marks have been removed from the text.

As for the spellings of Chinese names, mainly the Pinyin system is used.

However, the Wade-Giles system is also employed for words still commonly used: for instance, "Chiang Kai-shek" instead of "Jiang Jieshi."

Words like "Nanjing" and "Nanking" are regarded as interchangeable.

This website was originally submitted by Masato Kajimoto in partial fulfillment of the requirement for the degree of Master of Arts in the Graduate School of Journalism of the University of Missouri-Columbia in August 2000.

It has been listed as an essential academic reference by a number of educational institutions around the world. Some lecturers are using the site as part of their reading assignment. 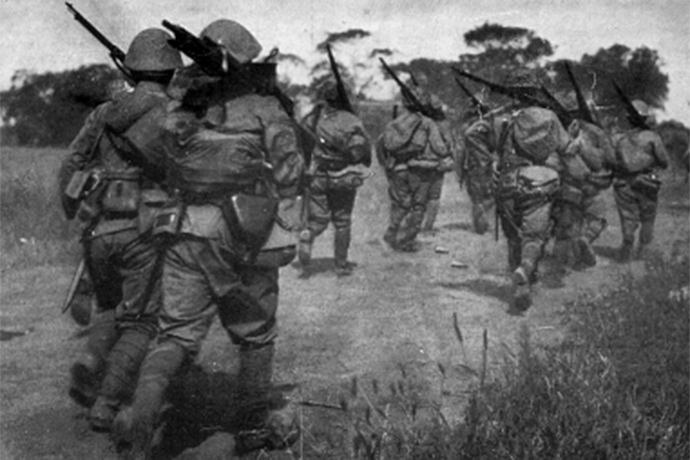 Prisoners of War at Mufu Mountain

Charred bodies on the Yangtze bank. Photo taken by Murase.

A correspondent for Asahi Newspaper reported that on December 13 and 14, 1937, the Morozumi Unit (the 65th Infantry Regiment of the Yamada Detachment in the 13th Division) took prisoners of 14,777 Chinese soldiers in the vicinity of the artillery fort of Wulong Mountain and Mufu Mountain that lay at the south bank of the Yangtze River.

However, there had been no further follow-up report since then and for decades it was unknown what had become of those prisoners of war.

In Japan one theory told that half of them were released, a quarter of them escaped and the rest started a riot and consequently got killed.

Another theory told that all of the captives were dragged to the banks of the Yangtze and executed.

In the late 1980s, as stated earlier, a chemical factory worker in Japan, Ono Kenji, investigated the incident by interviewing 200 or so war veterans and gathering 24 wartime diaries and other historical materials. [75]

Ono collected 24 wartime diaries in the course of his investigation.

Ono’s research made it clear that the 15,000 captives and additional 2,000 to 3,000 prisoners taken after the 14th were all massacred by military order.

The mass executions of those POWs are possibly the largest in the Nanking Atrocities. They were conducted in two days on the banks of the Yangtze near Mufu Mountain.

The dead bodies were quickly covered with gasoline and burnt. And many corpses were later thrown into the Yangtze River.

Following are some quotes from the confessions Ono videotaped and the diaries he collected.

Upon his and his interviewees’ request, they are all assigned pseudonyms. 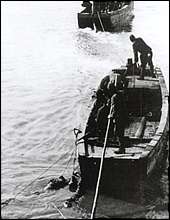 [Interview on the videotape] I joined the Army two days after I got the draft paper. I was determined to fight, but couldn’t possibly tell my wife that I would most likely die. So I simply told her to keep our house intact. Those drafted for the first time were delighted to serve their country and the Emperor, but I knew that going to the front meant facing death. When I got on the train, I kept thinking that it was the last time to see my brothers and others. I couldn’t help crying. [76]

[His diary on November 25, 1937] Upon arriving the quarters we killed two big pigs. And now we are eating them. War is such fun. Those who like drinking could drink as much as they want. The weather has been, finally, pleasant for the last few days and so is our mind. [77]

[His diary on December 16] We took about 5,000 prisoners of war, some of those we captured a couple of days ago, to the bank of the Yangtze and mowed them down by machine guns. Then we stabbed them with bayonets to our satisfaction. I probably bayoneted 30-odd hateful Chinese soldiers. Climbing up the heap of dead bodies and bayoneting them gave me a courage, which made me feel I could even vanquish ogres. I stabbed them with all my might while hearing them groan. There were some old ones and kids. I killed them all. I even borrowed a sword and severed a head. It was the most unusual experience I’ve ever had. [78]

[Interview on the videotape] The next day there was another call [for an execution] but I wasn’t assigned for it. I did it only once. I believe we killed all the prisoners of war our unit captured. I heard that we had some 20,000 in total… Before I crossed the river [to go to another front in China], I was shocked to see a long stretch of hundreds of charred bodies on the banks. Then I was sure we killed tens of thousands…. It [the Nanjing Massacre] is true, indeed. It is not a lie…. To be honest, I wanted the war to end in Nanking. I really wanted to come back [to Japan]. [79]

[Interview on the videotape] I heard they [the captives] were conscripted soldiers. I saw various prisoners, from younger ones to really old ones…. There were 20,000 of them. We took them out to the bank of the Yangtze River and machine-gunned them. It took us two nights to finish it off. We threw the bodies into the river later on, but the stream was so slow that many of them didn’t float right away.

[Interview on the videotape] At the time I didn’t think it was wrong. I was ordered to do so. After the war this story [of the mass executions by the Yamada Detachment] came up occasionally. Then I started asking myself, “Did I do something wrong?” [80]

[His diary on Dec. 16] The prisoners of war amounted to 17,025. In the evening received military order, took out one third of them to the banks and the 1st Battalion shot them. [81]

A cenotaph to those massacred near Mufu Mountain. These kinds of memorials can be found at major execution sites in today’s Nanking.

[Interview on the videotape] We tied them [the captives] up and began dragging them [to the execution site] in the morning…. It took all day to get them there. Then at night we machine-gunned them all…. There was corpse after corpse. Had it been in the daylight, I don’t think I could have faced the scene straight. I went back there to dispose of the bodies the next day. They were all charred and smelled awful. Even now I remember the smell.

[Interview on the videotape] The order to ‘do it’ came through all the way from the top…. Those high-rankings don’t know what it was like. They just order and never come to the scene…. I don’t know how they could talk about it. They haven’t even seen it. We, noncommissioned officers and men, were the ones who actually carried it out…. I wonder who on earth are those people to claim that such a miserable incident was “fabrication”…. Well, those “professional Army officers” were always behind the scene. [83]

[Interview on the videotape] I had experienced so much combat before Nanking. Compared with those, the Battle of Nanking was nothing. The Chinese soldiers were gone out of sight pretty quickly…. They [prisoners of war] were not all soldiers. I don’t remember clearly but I might have seen a few women, even…. Of course it was an order from above [to execute all the captives]. It wasn’t like five or ten captives…. I was not in a position to know the whole picture, but it was an official order. [84]

[Interview on the videotape] I made the pedestals to mount the machine guns. It was about one meter [3 feet 4 inches] high…. I did it [killed the prisoners] on the second day at the foot of Mufu Mountain…. I fired some 200 bullets in about ten minutes and that was it. I was allowed to go back and was lucky enough not to be assigned to dispose of the dead bodies. [85]

[Interview on the videotape] Well, in retrospect we were crazy. When I was taking them [to the execution site], I knew I was going to kill them. But I didn’t feel any guilt. Of course I can’t imagine doing it now. [86]

[Interview on the videotape] There were many prisoners of war who survived the machine-gunning. So we bayoneted those who were moving…. Some screamed like mad men when I stabbed them. It was so loud. Their voices haunted me for a week since then…. I heard that there were a few female prisoners of war. But I don’t think there was any elderly or children. They were all soldiers…. We just did what our superiors told us to do…. We burnt the bodies and they stank so badly…. I didn’t think much about it [the cruelty] at the time. I just thought war was like that. [87]

“If you read his [Mr. Kurosu’s] diary, you know it is something that you can’t easily talk about,” says Ono.

“I think those former soldiers used to have racial hatred toward Chinese. Many war veterans I interviewed still unconsciously use the word, Chankoro [derogatory term in Japanese literally meaning, “Chinese brat”], or something of that kind. But at the same time, many of those who committed the massacre have been tormented by their consciences for more than 50 years….”

“I became really close to Mr. Kurosu (pseudonym) through my research. I visited his house quite often and talked a lot. He seemed deeply repentant…. I was really surprised and couldn’t say a word when he gave me his wartime diary, which, he’d been telling me, he ditched before he landed in Japan. It was one and a half years after we met and made friends! Then I realized how hard it was for him to come to terms with the past. If you read his diary, you know it is something that you can’t easily talk about….”

“These [former soldiers’] diaries are candidly describing how normal, average persons had developed their animosity through combat and how they became mentally anesthetized through slaughtering captives and looting houses on the way to Nanjing. Once those cruel acts became their daily lives, they no longer had inhibitions….”

“After all, they were following orders from the Army. Most of those who massacred Chinese were noncommissioned officers and common soldiers. For them the orders were absolute…. Of course I feel compassion for the victims. But now I know the perpetrators were also psychologically scarred….”

“A veteran told me that he couldn’t forget the face of one prisoner he killed in Shanghai. He executed thousands of POWs on the banks of the Yangtze River later on, but those victims were already faceless for him. But the one he killed in Shanghai for the first time, he still dreams of the face once in a while. I think it really tells something about the psychological state of the soldiers in the Yamada Detachment in Nanjing.”

Go back to: Table of Contents